The Brighton Ourstory project was established in 1989 with the aim of collecting the archives of local gay and lesbian people and organisations in order to tell and preserve the community’s history. Much of the material collected by Brighton Ourstory is now stored at The Keep archive centre, under the care of the East Sussex Record Office. Included in the collection are the papers of Doug Coupe, which contain a document created by the Sussex Gay Liberation Front (SGLF) History Project in 2003. This document not only summarises the history and ethos of the organisation, but also provides a valuable insight into the lives of lesbians and gay men in 1970s Brighton.

Doug Coupe was born in Manchester on May 10th, 1936. He studied Art at Salford Tech and took an Art Teaching Certificate in Brighton where he settled in 1968. While living in Brighton Coupe taught in Haywards Heath. He was, along with  Simon Watney and Mark Rowlands who introduced him to Gay Liberation, a founding member of the SGLF, and also its first Chairman. Coupe was responsible for poster and art work as well as SGLF’s communications with Members of Parliament.

Across its 43 pages, the SGLF History Project document ranges widely. It includes everything from copies of meeting minutes to a list of the music tracks played at SGLF’s discos. The scope of subjects that it covers provides an insight into both the political aims of the group and the sense of community that the organisation fostered in the local area. Indeed, the section entitled ‘aims’ states that the purpose of the document was to provide both “dated information”, but also “more general anecdotes of the gay scene in Brighton.”

Although the accounts of demonstrations, meetings and campaigns within the document are reminiscent of scenes from elsewhere in the country, they can also be seen as distinctively local. The booklet recounts how in October 1972 GLF supporters waved “Glad to be Gay” and “No more Sex Roles” banners along Norfolk Square, and the following year protestors walked from Western Road to the seafront in the town’s first ever Gay Pride march. The “short history” of the organisation explains how the group was formed at Sussex University (hence the name of the group – Sussex, rather than Brighton, GLF), later meeting in Hove and various venues in Brighton. Most of the reports of the activities of SGLF are firmly rooted by a sense of place – writers explain march routes through the centre of Brighton, discuss local venues, and describe a gay wedding on the beach.

Social events take up as much space in the document as political newsletters or direct action. Considerable mentions are given to the special dances at the Co-op Hall on London Road, the Madeira Hotel and the Royal Pavilion, as well as regular discos at the Stanford Arms, Markwell’s and the Marlborough. In the same archive box are photographs of smiling faces taken at a fancy dress dance at the Royal Albion Hotel. The pages are full of conversations between friends, and stories from basements and balls. The anecdotes within the document not only shed light on the political aims of the Sussex Gay Liberation Front through descriptions of political action taking place in Brighton in the 1970s, but also the sense of community that the organisation helped to nurture through its social activities and outreach.

The document was created in 2003, almost 30 years after the formation of the Sussex Gay Liberation Front, and in itself demonstrates the continuing desire for queer people to document and preserve their own histories in their own words. Doug Coupe’s closing words on the final page suggests that he hopes others will see this history of the SGLF as a starting point, and encourages those who “have relevant memories” to likewise “contribute their recollections.” Indeed, its contribution to the archive reflects some of the aims of Brighton Ourstory itself – to tell and preserve Brighton’s lesbian and gay history, and ensure that the contribution of Brighton’s lesbians and gay men to the town are not forgotten.

The papers of Doug Coupe
Archive of Brighton Ourstory, held by the East Sussex Record Office at The Keep
Reference: OUR 63/1 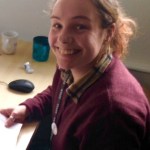 After completing an MA in Contemporary History at the University of Sussex, Louise Pawley is currently undertaking a graduate internship with University of Sussex Special Collections and works at The Keep archive centre. She is interested in the role of the archive in queer history, which was the subject of her MA dissertation.