Norfolk Island, as an isolated penal settlement designed for colonial recidivists, incorrigibles, and the worst offenders, was commonly known as ‘a “Hell upon Earth”’ or as ‘Sodom Island’. T. B. Naylor, late Reverend to the Island, in his 1846 letter to Lord Stanley described Norfolk Island’s convict barracks, where ‘unnatural crime’ was, he claims, rife, by citing Milton’s infamous couplet on Pandaemonium, the Capital City of Hell. The barracks were the ‘High Capitals / Of Satan and his peers’. Historical accounts of this text have viewed iterations of ‘sodomy’ and ‘unnatural crime’ as self-same to ‘homosexuality’ (Reid, Causer, Aldrich, McKenzie, Hughes). In adopting a historicist approach, through close reading, this paper aims to demonstrate the discourse of sodomy relates as much to sex between men as it does to a social inversion of authority.

Naylor attributes such an inverted Pandaemonic social order to architectural allowance for close proximity between interned bodies and invisibility from the gaze of authority. Antithetical to the panoptic ideal, such penal architectures, for Naylor, are productive of unnatural relations: that is, sex between men and, conterminously, mutinous relations to penal authority. The role such disciplinary arrangements serve in producing and defining placed localities – then as much as now – appears clear to Naylor. His representation of sodomitical social disorder – itself recalling the city of Sodom – through invoking the Capital City of Hell, Pandaemonium, highlights nineteenth-century discursive imaginations of sexual and social disorder as placed localities other to the metropole and outside of imperial authority.

Alongside this paper I will read a long-form non-fiction poem I have constructed from court, penal and manuscript archival research I have done surrounding one Samuel Jones. Transported to NSW at thirteen, Samuel was seen by Sydney authorities as an incorrigible, and, in 1832, was tried for sodomy and sentenced to life hard labour on Norfolk Island. In 1842 he was involved in an attempted mutiny, seizing, momentarily, Norfolk Island’s transport brig, the “Governor Phillip”. 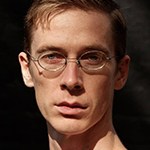 Mark Peart is a current PhD candidate in English at The University of Sydney, Australia. His work is concerned with reading for discourses of Sodom in the history of the convict colony of NSW. The colony was variously known as a ‘Sodom’, recalling nineteenth century notions of ‘Sodom’ as a civic locality of depraved social and sexual order. A component of this thesis is a creative manuscript of long form non-fiction poems drawn from these sodomy trial transcripts. His first book, “The Great Eastern”, a long form poem based on a Melbourne sodomy trial, was published by Rabbit in 2016.