In the Manchester City Archives, held at the city’s Central Library, there is a small box of archive material stored under the category “miscellaneous” and labelled “MISC/1184”. Inside, there is an unassuming stack of newsletters, pamphlets, and meeting notes from the late 1970s and early 1980s tied together with a piece of white cotton ribbon. These documents represent local community work that went into the Women’s Liberation Movement in Manchester, and, upon closer inspection, can give us a story about Manchester’s lesbian community in the 1970s and 1980s. 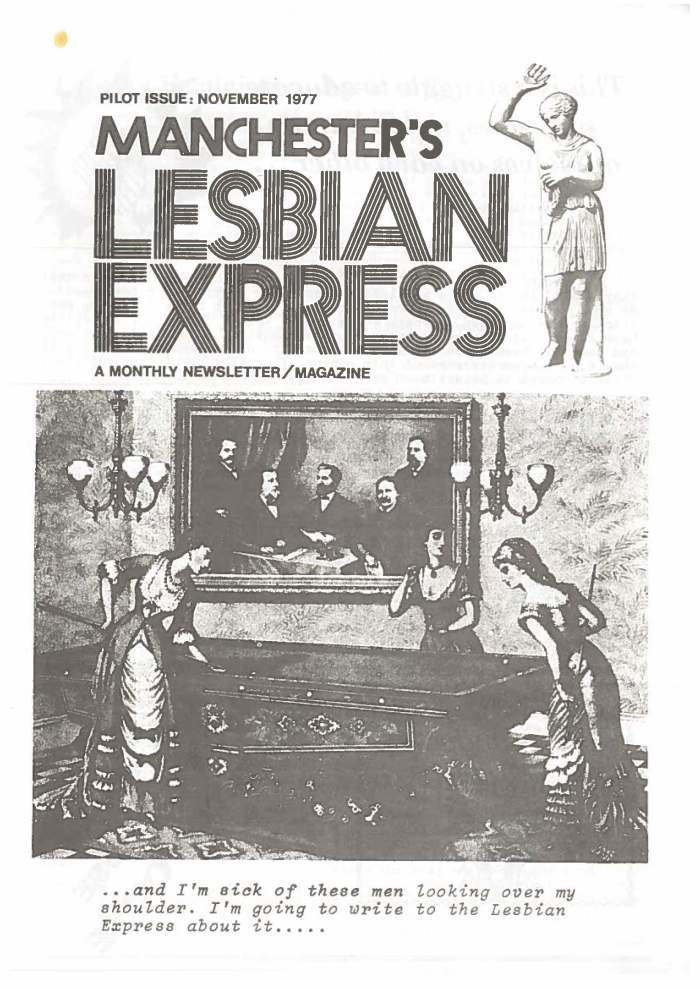 Manchester has always played an active role in the LGBTQ rights movement. In 1970, the students of the Victoria University of Manchester, now the University of Manchester, founded one of the first university gay societies: the Homophile Society. The Manchester City Council funded the opening of a Gay Centre in 1978 and added funding specifically for lesbian support in 1979, one of the first city councils to fund such a venture. Later, in 1988, the city see over 20,000 people marching to protest Section 28. Despite all of this, it can still be difficult to find the lesbians in Manchester’s history.

The invisibility of lesbians is a common problem when studying the past. This is in large part because, as women, lesbians historically have had less access to public space, less disposable income, and less time to spend on their own pursuits. This means that is has been harder for lesbians to establish lesbian-only bars or other exclusive spaces, and so lesbian women have tended to gather in their own homes, have had to share spaces with other groups of people, or have had to use spaces part-time. So, while bars and pubs used by gay men leave traces in the historical record via newspaper advertisements, licensing applications, or mentions in news stories, meetings between lesbians within their own homes do not. All of these factors make lesbians harder to track down in the historical record. We have to look elsewhere, and often harder, to find lesbian histories. One of the places we can look, however, is inside archive box MISC/1184 and the pages of the Manchester Women’s Liberation Newsletter that are stored there.

The Manchester Women’s Liberation Newsletter (MWLN) was published by the Moss Side Press, later Moss Side Community Press Women’s Co-op, and acted as a community paper that shared information about community events, protests, rights, and health care. It sometimes also published comics and short stories. It was not lesbian-specific, but did actively publish information about lesbian-specific groups and events. The Central Library Archive collection spans issues 1-42, covering a decade of women’s activism in Manchester. Unfortunately, some issues are missing, but by examining the contents of the issues that are present, we can get a glimpse of the lesbian community in Manchester in the 1970s and 1980s. 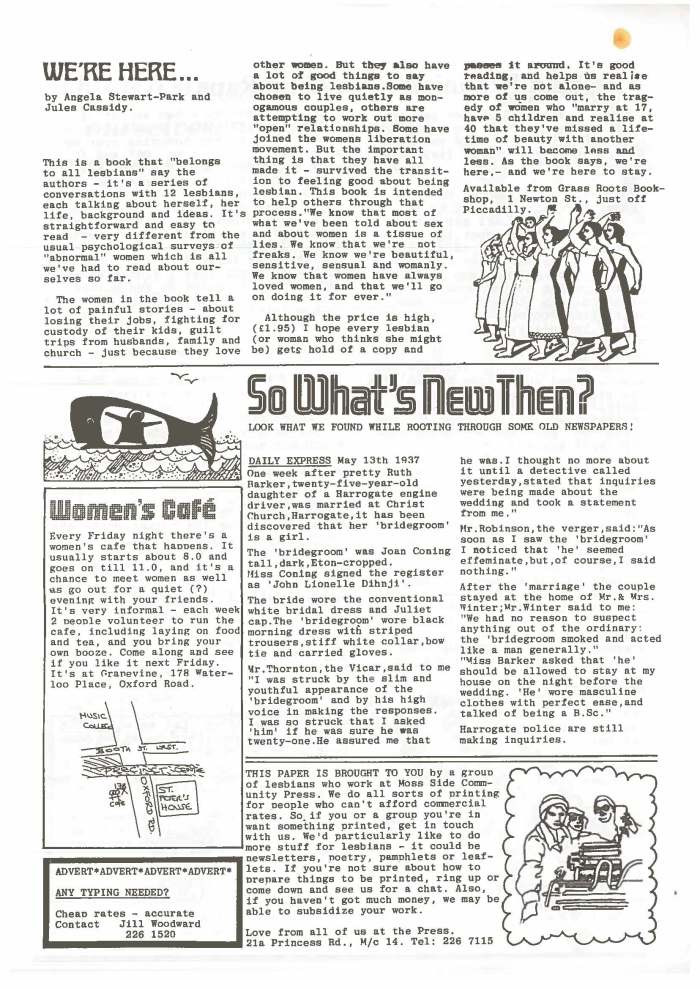 From the beginning, the MWLN includes information about a weekly Gay Women’s Group. But in the second issue of the MWLN the is a small 4-page pull-out titled Lesbian Express, the only surviving copy of a short-running newsletter written by and for Manchester’s lesbian community. The newsletter, published in 1977, lasted for either 3 or 4 issues, but was forced out of print due to internal politics at the Moss Side Press. Luckily, this first issue still gives us some unique insight into the city’s lesbian community in 1977. On the very first page, a comment notes that Manchester does not have any gay pubs or clubs that are women-only. There are also accounts of violence against lesbians, a book review, a short section on lesbian history, and an advert for the Women’s Cafe – a weekly opportunity for lesbians to meet a socialise in a relaxed setting. These few pages give us an image of a small but active lesbian community.

After the disappearance of Lesbian Express, the information about gay women’s groups and social events returned to the other pages of the MWLN. This persisted until the launch of Lesbian Link – a women-specific phone support line run by lesbian and bisexual women out of the Gay Centre on Bloom Street.

Lesbian Link was born in 1977 out of the Gay Switchboard – a phone line operated by the Gay Centre that provided support for local gay people, as well as information about local meeting groups, social events, and addresses of gay or gay-friendly bars. Lesbian Link was started by a group of women who were, in their own words,

pissed off with the men and wanted to start a line by and for women. They felt that there was not enough time or space for women to get through, and realised that women were being put off by having men answer their calls.

Over their years of operation they had volunteers available to take calls between 4 and 7 nights a week. They offered information about lesbian or women’s-only discos, chatted with lesbian and bisexual women who felt isolated, and even arranged to meet up with callers to introduce them to the local lesbian scene. 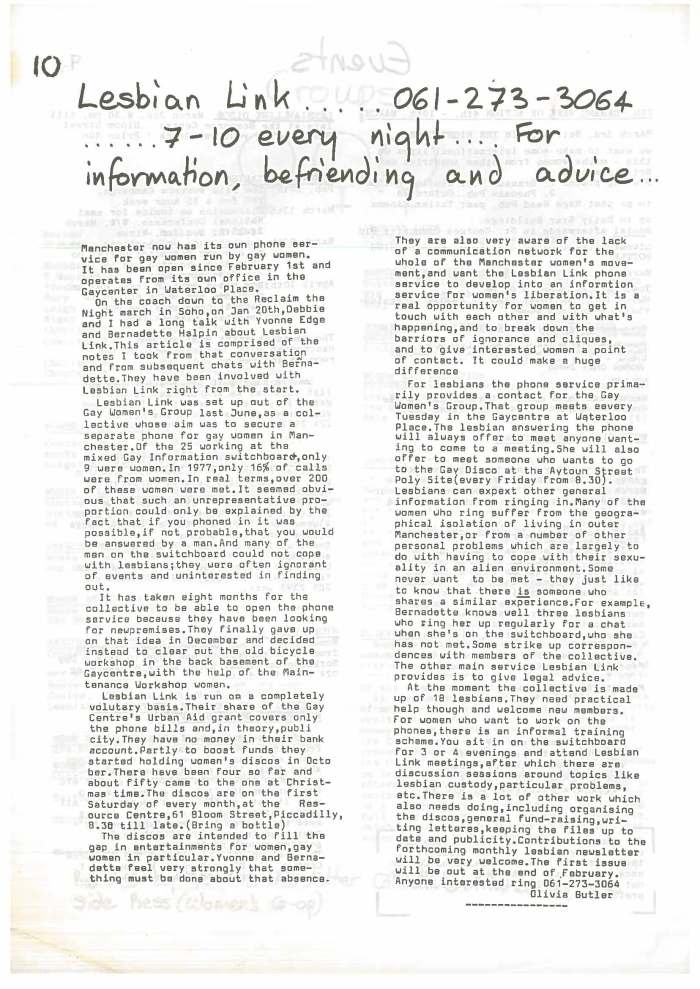 Lesbian Link began almost immediately to hold monthly discos. The first disco was held in the Resource Centre on Bloom Street in what is now the Gay Village, and attendees were asked to please bring their own drinks. The discos changed venue regularly. Some advertisements list them at the Resources Centre on Bloom Street, St Peter’s House on Oxford Road, the Castle Hotel on Oldham Street, the Millstone pub on Thomas Street, and Manchester Polytechnic (now Manchester Metropolitan University). The venue changes were due to how many women were expected to attend, availability of space, and how the landlord felt about playing host to a disco full of lesbians. These discos ran concurrently with monthly women-only discos at the Briton’s Protection on Great Bridgewater Street, and while they were not lesbian-specific, several pieces published in the MWLN make it clear that they were very popular with the lesbians and bisexual women.

When looking at Manchester’s history, it is much easier to discuss gay male pubs and bars because we can more easily identify them as gay-specific spaces. In the case of lesbian discos, their locations and histories are less static and clearly defined. The MWLN offers insights into a transient past of lesbian-specific discos, a tangible record that says “lesbians were here, were meeting, were planning, were socialising”. The box of newsletters contains valuable stories and hidden histories. Inside the Manchester Women’s Liberations Newsletter are details about women, and women who love women organising the community, socialising, and working for equal rights.

Archive Images courtesy of Manchester Libraries, Information & Archives. You can make an appointment to see this collection by emailing: archiveslocalstudies@manchester.gov.uk Lois Stone is a PhD student at the University of Manchester. Based in the archaeology department, they are examining materialities of trans identities and how trans history is currently being represented in museum exhibits and archive collections. Lois’s MA research, also based in the archaeology department at the University of Manchester, looked at how oral history techniques can be used to map LGBTQ+ history in Greater Manchester. You can reach out about their research at lois.stone@postgrad.manchester.ac.uk or can follow their PhD research, stories of archive visits, and get pictures of their cat on twitter at @supitslois.