Upon first reflection, the Surrey town of Guildford may not seem an obvious location for one of the country’s earliest gay groups but in 1977, Guildford Area Gay Society (GAGS) was founded there. GAGS was Surrey’s longest established LGBT community group until its demise in 2016. GAGS unique archive was placed in the care of Surrey History Centre, the county’s designated record office, in March 2017 (SHC ref 9745).

Initially, an official branch group of the Campaign for Homosexual Equality (CHE) was formed in Guildford in April 1976, with meetings held at members’ homes, centred around chat and coffee. Key members felt the need for somewhere local for gay people to meet socially, especially for those who didn’t want to always meet in a pub or travel to clubs in London or Brighton. At the group’s AGM in February 1977, it was decided to reform as Guildford Area Gay Society and to operate independently from CHE.

With good access to regional universities and London the group initially attracted about 30 members, which later grew to over 100, and included both men and women. GAGS was vital to those who could not ‘come out’ and it provided a relaxed forum in which gay people could socialise informally. The early Terms of Reference for the group stated that an age limit had to be obeyed – 21 not 18 – to reflect the age of consent, until this was later lowered. GAGS organised excursions, country walks, parties and cultural activities, and it also raised money for local and LGBT charities. In recent years, falling membership and the lack of members willing to stand for office resulted in the sad decision to close GAGS at their AGM in March 2016.

Methodically compiled, unique and fascinating, the GAGS archive includes meeting minutes, and a complete set of newsletters charting the life of the group. Files of correspondence provide an insight into the contemporary local gay scene, featuring exchanges with CHE and the short-lived Surrey Gay Linkline and Surrey Gay Switchboard. Other regional gay groups are present in the collection, such as Kingston and Richmond and Wimbledon area gay societies. Subjects covered include HIV and AIDS awareness, and the establishment of other gay organisations, notably Surrey and South West London Area Gay Organisations (SAGO), Surrey and London Area Gay Organisations (SLAGO), South London Gays, and the Pimpernel Group, Croydon. One file features correspondence with Surrey MP Cranley Onslow, regarding the Criminal Justice Bill, 1991. A wonderful, entertaining series of GAGS scrapbooks contains captioned photographs and often amusing reports of social events and activities.

Perhaps one of the more unexpected but key items in the collection is the home-made GAGS banner, which was present at every meeting and carried by members at the Gay Pride March in London, 29 June 1985.

The collection catalogue (SHC ref 9745) is searchable online http://www.surreyarchives.org.uk/Calmview/ and is available for public study but due to the sensitive nature of some of the material, unpublished records are subject to access restrictions.

The changing needs of Surrey’s LGBT+ communities are now supported by Outline, https://outlinesurrey.org.uk/ a beneficiary of GAGS. Preserving continuity in LGBT archives is crucial and Outline’s records have also been placed with Surrey History Centre (SHC ref 9240). 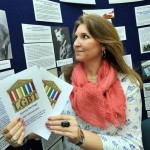