In the early 1970s gay Jews were meeting casually in a Clapham bedsit. By the early 1980s the first UK Jewish Gay Group (later to be called the Jewish Gay and Lesbian Group) was meeting formally in a room in Alyth Gardens Reform Synagogue in Golders Green, NW London. Already London was proving to be THE gay Jewish city in the UK with a growing infrastructure to support a growing community. By the late 1980s, London had its first LGBT+ Jewish Helpline. It was becoming a city of centrifugal force for LGBT+ Jews. In 1984 the JGG produced its 1st Purim Spiel in Hendon Reform Synagogue, NW London, celebrating NW London as a site for particular performative pleasures for gay Jews (with references in the play to camp, ‘Jewish/Gay’ musicals, cross dressing, cruising, Jewish food). As the writer of the 1983 Spiel put it in 2015,

It is like a private language in two ways in the script. Two things. One is a reference to the Heath whatever -people would be familiar with that – or the clubs, be there is also the Jewish language like in “Brush Up Your Talmud” where many people wouldn’t understand the [Yiddish] jokes the lyrics.

Margaret Greenfields and Searle Kochberg will talk about London as a site for LGBT+ Jewish pleasures by referring to their recent AHRC ‘Connected Communities’ research project Ritual Reconstructed (2014-15) involving creative film collaborations with LGBT+ London Jews, one of which was a 2015 remounting and group reflection on the original 1984 Purim Spiel. Searle Kochberg will continue with the subject of LGBT+ Jewish London performative acts on film, with a discussion of his practice PhD thesis My Jewish London (2011-17) and how in one research film the streets of Canons Park prove to be a trigger/stimulus for one gay person’s reenactment of their Jewish adolescence. 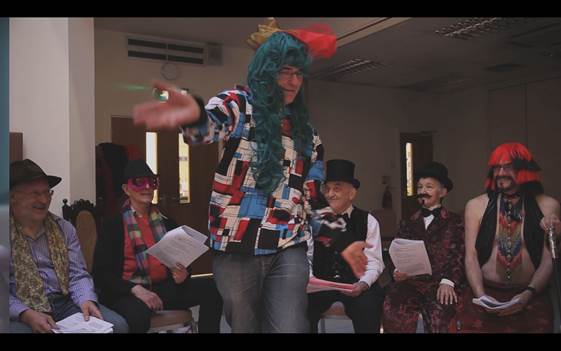 Both creative projects involve the tinkering of materials (what Lévi Strauss called Bricolage) and demonstrate how London locales, film and ritual made with everyday materials can help generate and consolidate identities for LGBT+ Jews.

The talk will end with a proposal for creative community projects beyond London where other forces may be at play in the making LGBT+ Jewish identities.

Banner Image: The Purim Spiel – musical play, w. Barry Davis, 1983 – remounted on film as a performed reading at the Montagu Centre, Central London, March 2015. The original play was about camp, musicals and gay Jewish culture in North London. The remounting included reflections on film by the participants, with the inclusion of women cast members for the first time. Searle Kochberg is a maker and writer on cinema and other performing arts. He is currently pursuing a Practice PhD at the University of Portsmouth in auto-ethnographic Film and Jewish Gay London, entitled My Jewish London.  He teaches at the same institution. His areas of research are film studies, directing and script (fiction and nonfiction). 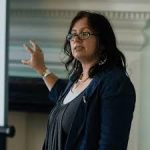 Margaret Greenfields is currently the Professor of Social Policy and Community Engagement (2013-present). She is the Director of the Institute of Diversity Research, Inclusivity, Communities and Society (IDRICS) at Buckinghamshire New University.

London: a central place in the creation and consolidation of LGBT+ Jewish identity