Rainbow Pilgrims is a landmark project that discovers the hidden history of LGBTQI migrants in the UK past and present.

The project explores the narratives around ‘rites and passages’, documenting the interconnection between faith, sexuality, gender and ethnicity in place and time. The project aims to highlight the complex patchwork of identities and journeys – cultural, religious and sexual – examining how these identities interrelate with each other in the framework of UK migration, both within the British Isles and from outside UK borders.

The voices and images of over 30 LGBTQI members of the diverse migrant populations are documented by means of oral history, film and photography; focus are the marginalised migrant groups of refugees/asylum seekers, as well as minority groups within Britain’s borders such as Gypsy, Roma and Traveller communities (GRT).

Rainbow Pilgrims discovers the rich heritage of LGBTQI migrants in the UK so that their contribution to British society can be celebrated and preserved for future generations.

The project is supported by Heritage Lottery Fund and proudly hosted by the charity Liberal Judaism; the collection will be deposited with the London Metropolitan Archives. 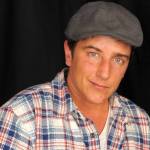 Surat-Shaan Knan is an LGBTQI heritage manager, diversity consultant, international campaigner. He is a member of the Stonewall Trans Advisory Group, GIRES and the Trans Organisations Network Worker for the LGBT Consortium. He works for the UK charity Liberal Judaism and is the founder of the landmark oral history projects Rainbow Jews, Twilight People and most recently Rainbow Pilgrims: The Rites and Passages of LGBTQI migrants in the UK. Follow Rainbow Pilgrims on Twitter @RainbowPilgrims (Image credit: Ajamu)

Rainbow Pilgrims: The Rites and Passages of LGBTQI Migrants in Britain