“When is our birthday?” asked Ali, the LGBT Centre manager. A simple enough question, or so I thought. The answer took four months of archival research, knee deep in 80s gay magazines and patchy council meeting minutes and records. I unearthed an intriguing story of how Manchester (potentially) became the first place in Europe to have an entirely publicly funded, purpose built centre for the gay community.

The place considered the first “gay centre” in Manchester was a small dank 700 sq ft basement on Oxford Road occupied by a group known as Manchester Gay Alliance. The Alliance consisted of Manchester Lesbians Group, the TV/TS [Transvestites / Transsexuals] group, the University gay soc [the Homophile Society], the Campaign for Homosexual Equality (CHE) group, and Friend. In 1978 a successful grant application was subsequently supplemented by funding from council rates to help support its services including general information phone lines, counselling, and befriending groups. The gay centre’s first annual report (1978/9) set out the rationale for the centre and the need for alternative premises as their current space was damp, cramped, and, literally, underground.

In 1981, yet another basement, at 61A Bloom Street, became the new home of the Gay Centre. It provided several phone lines including Lesbian Link, Manchester Gay Switchboard, and Friend as well as meeting rooms. In response to a huge number of phone calls from younger people it also ran a youth club and launched a late night café called SNAX providing much needed revenue.

In 1984 the staff, supported by the Council’s newly formed Equal Opportunities Committee, searched for new premises, as the groups had outgrown another basement home. There was much debate about the new location. Should it remain within the presumed safety of the gay area of Canal Street or relocate somewhere more neutral and anonymous. A site was selected on Canal Street, and in December 1986 the Council approved the necessary capital funding of £118,000 for the building. The location is now known as On Bar, and was previously Mantos.

Unfortunately, that site on Canal Street fell through as the seller objected to its intended use. So, in the early months of 1987 sites already owned by the council were considered.

A site on Sidney Street was subsequently identified and, from May 1987, open meetings were held to discuss the new premises. Unfortunately the Covenant Community Church launched a campaign against the proposals in the planning application. They managed to galvanise support and sent around 20 members of the Gospel Outreach Team to oppose the application armed with a 147 signature petition and opposition letters from businesses. The Gay Centre obviously had no idea they would face such opposition as the steering group sent only 2 volunteers to attend the planning committee! Despite this opposition the Planning Committee approved the application.

It is important to place the funding and building of the centre in a national context: in June 1987, Gay Life reported that a little publicised bill had passed through Parliament. Section 28 of The Local Government Act 1986 (Amendment) Bill 1987-88 included a now infamous section:

2A – (1) A local authority shall not – (a) intentionally promote homosexuality or publish material with the intention of promoting homosexuality; (b) promote the teaching in any maintained school of the acceptability of homosexuality as a pretended family relationship;

The Conservative government introduced the amendment at a time when it was alleged that some Labour local authorities were spending money on actively promoting homosexuality over heterosexuality. During 1988 a national campaign against the bill took place and was headquartered at the Gay Centre on Bloom Street. On February 20th, 1988, 20,000 people marched through the streets of Manchester to protest against Section 28.  It was organised by The Northwest Campaign for Lesbian and Gay Equality and culminated in Albert Square outside the town hall. This national context makes the decisions of Manchester City Council to continue to fund a purpose-designed building for the gay community at this time all the more fantastic.

Construction work started in 1988 around the same time that Section 28 became law (May 1988). Having already approved grants to build a new gay centre, that September an application to increase the core funding for the services was refused. Sadly this may have been a consequence of Section 28, along with city’s worsening economic situation.

The leader of the council and long-term supporter of the centre Graham Stringer opened the building on 27th November 1988. Over the last 30 years the centre has been through many managerial changes, funding cuts, almost getting thrown out, but each time the centre was under threat it was the long-term volunteers, dedicated staff and the users who loved the centre who would fight for its survival.

To bring us up to date, in 2012 the centre again lost funding and was under threat of closure. Some long-term youth workers set up an independent company called LGBT Youth North West, which later re-branded as The Proud Trust. They deliver youth groups, peer support, training, events and campaigns, undertake research and create resources. They also manage the LGBT Centre. The centre itself is home to 15 community groups, 2 youth groups, a community cafe, office space and a small but key Resource Library.

In 2014-15 The Proud Trust commissioned a feasibility study to assess the possibility of obtaining a long-term lease on the building, as well as refurbishing or extending the existing centre. After many years of consultation and design work, the Proud Trust are now looking for funding to rebuild the centre on the existing site so they can improve the accommodation for these vital services and promote and celebrate LGBT rights for future generations! They would appreciate your support. 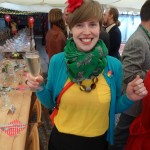 Emily Crompton is an architect and urban designer with a desire to involve as many people as possible in the design of spaces, buildings, neighbourhoods and cities. She currently works as a project coordinator on a research project at Manchester School of Architecture. She tweets from @emilyonabike

We were born in the 80s: A history of the Joyce Layland LGBT Centre, Manchester