“It was like we took over the city, and the city wanted us, welcomed us.”

“It made our city into the one place where lesbians could hold hands, be proud and feel the warmth of the welcome.”

“It was an important and joyous experience for so many lesbians for a decade or so – and is still much missed.”

In June 2017, a community-led exhibition on the last 50 years of York’s LGBT history will open at York Castle Museum. When we launched our call for memories and contributions as part of the York LGBT History Month programme, one thing emerged immediately as a significant and vibrant part of the city’s queer past: York Lesbian Arts Festival. Emails flooded in from across the UK offering long-cherished tickets and programmes, photos of writers and bands, and vivid memories suffused with feminist solidarity and the scent of warm chocolate.

The photo above shows Jenny Roberts, organiser of the festival, opening the final performance in 2003. Jenny has featured in many stories submitted for the exhibition as a pivotal figure in York’s LGBT history. In 1998 she opened Libertas! bookshop on Gillygate, which quickly developed a national reputation as a safe lesbian space. The site’s significance was acknowledged when it was marked with a temporary rainbow plaque in February 2015. One bi woman has spoken warmly of how Jenny’s arrival in York, and her financial generosity, invigorated the social scene for lesbian and bi women in the city: women’s dances were relocated from a pub beside the outer ring road to the glamorous York Assembly Rooms.

YLAF began in 2000 as the ‘Diva Roadshow’, an event held at St John’s College (now York St John University) to promote Diva Books, and grew in strength and popularity until it moved to take over the huge venues of York Racecourse and the Barbican. Up to 2,000 people flocked to York from all over the country to see writers including Sandi Toksvig, Alison Bechdel, Stella Duffy, Sarah Waters, Val McDermid and Jackie Kay. The evenings were filled with music and dancing, culminating with Saturday night’s ‘disco of a thousand lesbians’.

Women speak with affection of YLAF’s inclusive ethos. It was led by a trans woman and welcoming to bi people as well as lesbians. The festival invited speakers of diverse faiths and cultural backgrounds. It serves as an important reminder that there have long been alternatives to the fragmented communities and antagonism between some queer women that we see today. Significant, too, are the memories of a city-wide welcome. Indeed, the sense of safety and community that the festival brought seems to have suffused the whole of York.

Today, I am often met with surprise when I describe York’s activist life. Its numerous LGBT organisations including an active LGBT forum, a thriving Pride, a large annual LGBT History Month festival and a queer arts company would be the envy of a much larger city. While York residents cling to Emperor Hadrian, WH Auden and Anne Lister as evidence of the city’s connections to long-past LGBT history – perhaps in keeping with the local heritage sector’s emphasis on York as the land of Vikings, Romans and well-preserved buildings – the many joyful memories of YLAF underline its enormous significance to the recent history of queer women in the UK.

“York Out of the Closet: 50 years of LGBT history” featuring memories of YLAF among many other stories, will open at York Castle Museum on Monday 5th June. 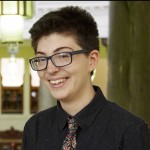 Kit Heyam is a PhD candidate in the School of English at the University of Leeds, an Assistant Coordinator of York LGBT History Month and a freelance trans awareness trainer. He tweets from @krheyam